Preparations of My Heart for Change

February 14, 2013 / Jennifer Coleman / 2 Comments
I’ve been so afraid to go back and re-read my last two “Faith and Breast Cancer” posts. I couldn’t remember what I wrote. I remembered only all the pain and frustration I was feeling and how I so wanted to move forward.
Writing journaling, posting so helps me to move forward. If I couldn’t write, I would go crazy. Thank you for being listening ears.
The day of those post was a turning point for me. I stopped fighting the post mastectomy pain and accepted it. I returned to having regular prayer, seeking, waiting, worshiping times. I found peace and contentment, which was what I wanted. I was lost and didn’t know if I should be fighting/believing for more healing or resting content in what I had. Is it possible to do both? I think maybe I am now. ??

The Lord was speaking to Mike and I at that time about a “change” on the horizon. We were both seeking God about what we needed to do to prepare for the “change.” In the past, when there was a change on the horizon it’s meant a move or a new addition to the family. Mike started praying about preparing for early retirement and a new career.  I prayed about a career of my own and about adding to the family through adoption. We’ve both had a heart for orphans. I read and prayed and learned a lot about adoption. I am still praying.
The sense about the “change” became so urgent I finally prayed, “God what do I need to do to prepare for the change?” He answered that I needed to meditate and worship. I thought, “Oh, that’s easy.” I was so glad that I was off the hook.. that the “change” was in His hands.
In August, I started feeling like I needed to go to a woman’s retreat of some kind. I had a schedule conflict with the one at our church. Finally, I decided that if I didn’t go to the Ramp’s Women’s Retreat that I would wish I had, so I bought two tickets.
The week before the retreat, it came to my attention that there were still things in my heart between me and God, and I started to panic. Nothing stays hidden at the Ramp. The presence of Holy Spirit is unmistakeable and very strong. I knew had to deal with my heart before Judi and I went, or risk crying publicly (possibly loudly) when my heart was undone in His presence, so I started praying and fasting. 🙂
The day before the retreat, the Lord showed me a hurt I had buried deep down while seeing doctors about my breast cancer. For me, having the mammograms done weren’t that bad. The biopsies, consulting with the first doctor alone.. all that was hard but not horrible.
Mike was with me the day one doctor told us with very strong words that we absolutely should not do the thing we had prayed about and really wanted to do. We eventually decided that God led us to him and took most of his advice.
The day of the surgery I had amazing peace.. peace like I’ve never felt before in my life. One of the nurses was kinda freaked out over my corn allergy and upset the doctor who yelled at me as I lay waiting for sedation.. still not too bad.
The very hardest thing for me was my first appointment at the plastic surgeon’s office. He had an emergency surgery and could not come in that day so we met with his assistant instead. She was very kind, very professional, told me that with my body shape I could choose any surgery I wanted, and answered all our questions. All was good until she told me that the insurance required that she take pictures of me basically naked.
She took me into a private room with a curtain, took a front pose, and poses from both sides. All I could think was, “Who in the world would require a thing like that? Who is going to develop these photos? Who will see them in my file? Who at the insurance offices will see them?” I stood there ashamed, gritted my teeth and bared/beared it. It was awful.
The Lord spoke to me that He wanted to heal my wounded heart; that He bore shame on the cross for me. Later that day, I received a long fb message from my Thai daughter, Savannah, who was hurting. I was so blessed to be able to share with her what the Lord was doing in my heart and pray for healing in hers as well.
Now and then I will get a vision of the Lord that will stick with me until I get a new one. Sometimes I’ll have the same one for years. At the Ramp’s Women’s Retreat the Lord gave me a vision of His nakedness on the cross. I cried silent tears. It so blessed me as He continued to minister to my heart, but I prayed, “Lord, I hope you will give me a new vision quick.”  🙂
The Lord also added playing my little harp to my list of things to do to prepare for the “change” and impressed on me that I wasn’t only off the hook for directing the “change,” but I had to actually prepare. I hadn’t played my harp very much since the surgery. The tuning pegs are very difficult to turn, it has to be tuned daily, and the turning motion post mastectomy quite honestly was painful, but a little better.
The Lord gave me four new songs in the next couple of weeks. One song was based on the main message from the retreat, “His strength is made perfect in our weakness.” I so enjoyed the preparation, the time of worship and meditating on my “Confessions of Praise” daily.
And it so helped me. The morning after we lost Joel. I got up, in shock, couldn’t think, stood in my kitchen and was at a loss for what to do. Just the morning before, Joel had been there visiting with me while I finished polishing up three songs on my harp. Then I knew what to do, “Pray, meditate, play my little harp.”

Kinnor in the Mornings

February 11, 2010 / Jennifer Coleman / 1 Comment
I’ve been enjoying playing my Kinnor early in the morning.  I worked on improving my first song and I’ve been learning a couple of other songs.
This is my attempt at a song by Hillsong called “Healer”.
My harp only plays in two keys (D and Bm) so I was glad to find a real song I could play.
It took me forever to learn how to play “I trust in You, I trust in You.”
Then I had to write down the cords so I could remember the whole song.

Here are the words:

You hold my every moment

January 24, 2010 / Jennifer Coleman / 2 Comments
I am the proud new owner of a 12 string kinnor.
A harp maker in Austral made it for me.
I picked it out especially because a little over a year ago I had a dream where
an older, mentor type lady brought one to me.  I had no idea what kind of
instrument it was at the time so I drew a picture of it.
A year later I found this one on line.   None else makes one quite like it.
http://www.harpsales.com
It’s my birthday, Christmas and everything else present all wrapped into one.
I am very excited.  I am hoping that like in the dream
this will be the one instrument that I can learn to play.

It’s very hard to be musically challenged in a family of musicians.
I love to worship.  I love to sing loud.. even when I am out of tune.
A loud church sound system is a must.
I can jump but not dance.  Sometimes, clapping on beat is a challenge.
I’ve never had anyone tell me that I am bad at waving flags,
so I wave them as often as possible.
I am very excited to have a room in our new house that’s big enough
to worship with flags.  In the past, I’d take them outside occasionally.
When the kids were younger, I spent every evening practicing the guitar
while they were getting ready for bed.  I learned how to play 10 or so cords
just to discover that I am not coordinated enough
to strum and play the cords at the same time.
If I practice a hymn for several days on the piano, I can play it so-so,
but that can be loud and annoying for everyone to hear the same song day after day.
I know how it feels to be on the other side of things and think, “anyone can do ___ if
they just try or give it some time.”  Hope springs eternal. 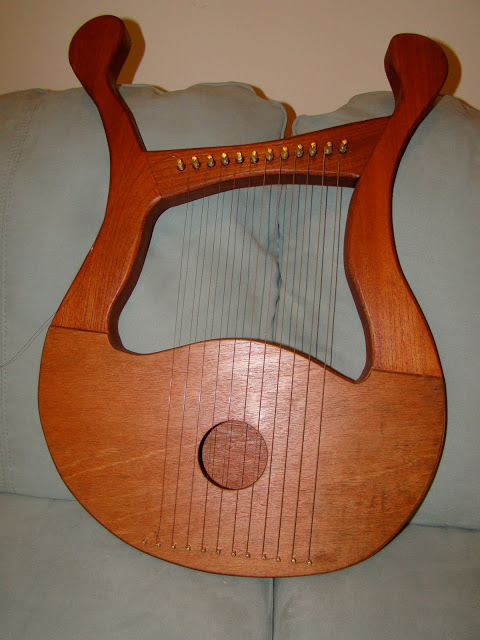 I learned that harps are “diatonic” like the Do, Ra, Me scale,
so no matter what note you play it harmonizes. 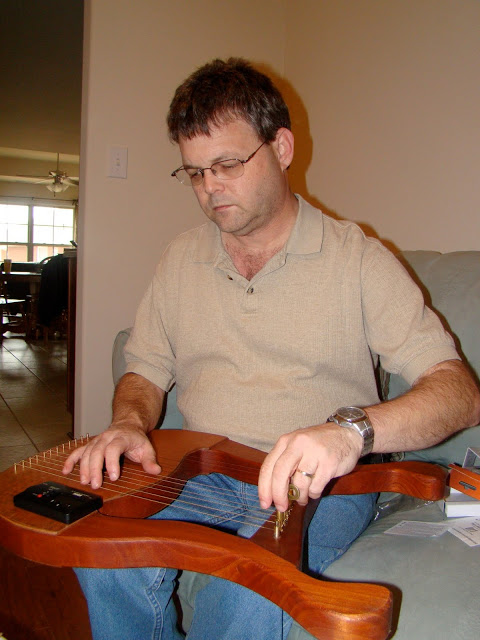 I got a chromatic tuner too, so I can tune it.
Here is Mike teaching me how to tune it.
I’ll have to tune it everyday for a while.. new strings and all.

Pray for me not to give up.
Maybe one day I’ll take it to hospitals
and play and pray for the sick and see them recover.
Love,
J