Dwelling Safely in “The Cove”

Two Wednesdays before we lost Joel, a guest speaker visited our church.  His message was “It is well.”  Mike and I were both encouraged because we’d each heard and felt impressed with that same message and song on our hearts earlier that day.  “It is Well” made such an impression on us that we included it in our list of songs for Joel’s memorial.  We were so comforted to know that Joel was spending eternity in Heaven with Jesus and that God, like Joel’s name proclaims, was still sovereign and still with us.

The Sunday following the guest speaker’s visit, Mike and I took a short trip up to see the Smoky Mountains.  We were able to take several trips that last year.  They were much needed after going through breast cancer and a stressful job change the year before. We are very thankful that we had that time to heal together before losing Joel.  We had a nice time in the Smokys, saw a couple of shows and went for a hike to Laurel Falls.

The hike was a little strange.  I’d hiked there a couple years before with my parents and Joel and Judi.. 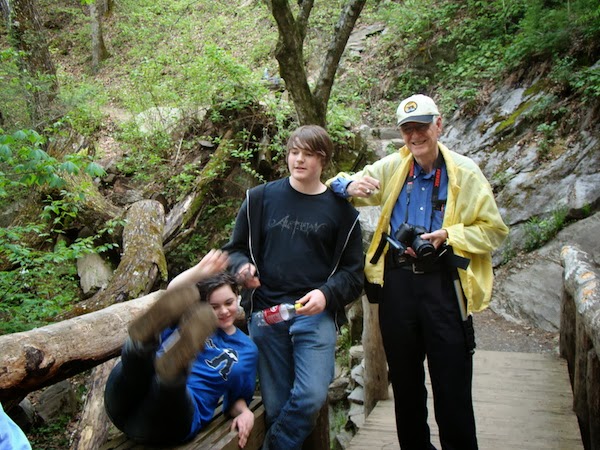 This time with Mike I kept seeing visions of Joel and Judi walking just ahead of us.  I’d never experienced anything like that before and I am still not sure what to make of it. 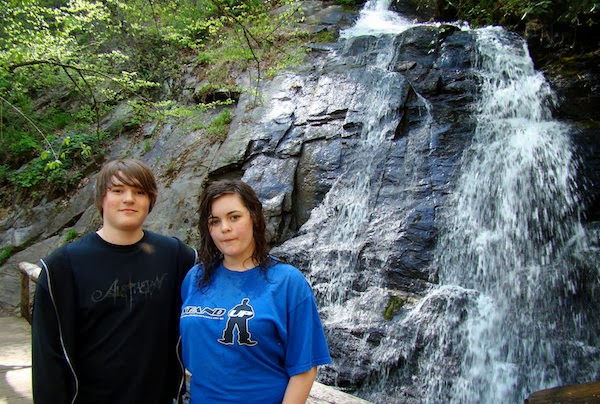 Jeremiah 33:3 to me: “Call to Me and I will answer you and tell you great and incomprehensible things you do not know.”

I responded with an awkward smile and, “I am good, God.  I don’t have any questions.”

Wednesday morning, I woke with a sick feeling in my stomach.  Later that afternoon on the way home my heart burned with a question for Mike.  I asked him, “If any thing were to happen, who would you call?”  He didn’t understand, so I clarified my question with another, “If I were to die, who would you call?!”  He answered, “Donald.”  Which I knew.  Donald has been Mike’s best friend since high school.  They’ve been through a lot together, including the loss of each of their fathers at a young age.

What I really needed to know was, “Who else?” “Which pastor?”  I knew when we lived in Florida and Montgomery that he would have felt comfortable calling our pastors there.  Our pastor in Montgomery was a loving father figure to us and our pastor in Florida a good friend, but although we’ve been faithfully attending our current church for several years, friendships have been hard to come by and it hasn’t felt like the family we’ve had and needed in other cities.

Later that evening, my Mother called.  I knew immediately that something was wrong.  She was grieving because a pastor/friend of ours had passed away and she had found out on Facebook.  I had no idea that in just two days my son, James, would be requesting prayer on Facebook for our family because his brother had died.  Knowing how awful that had been for my mother, I was in a panic the morning after loosing Joel; calling everyone I could before they read James’ post on Facebook.  I forgot one very important person, our Thai daughter, Savannah.  I am sorry, baby.

I’ve shared before how I’d spent my last day with Joel worshiping and putting up Christmas decorations and how he’d commented, “Normally it feels like Christmas.. but it doesn’t yet because I still have these final exams.”  Later that day, I stood beside him in the kitchen and silently told God with a thankful heart how much I enjoyed just being in Joel’s presence.  I now believe I was sensing a special anointing that he was to walk out that evening.

That afternoon, when Joel and Josh were preparing to leave for the birthday party, there were no warning alarms going off in my spirit.  I was listening for them.  I have tried mentor, guide and love my adult children without overly mothering them.. to be led of the Holy Spirit.  They have been truly wonderful, obedient, loving children who listen to and obey the Holy Spirit and I’ve tried to respect them for it and leave plenty of room for Holy Spirit to work in them.

That day Joel had a determination to go that Josh couldn’t argue out of him.  Most of the time it was the other way around; his siblings would beg him to go places, and he would bask in the attention. 🙂  After their argument, I asked Joel if the place they were going was safe.  He answered, “Yes, it’s safe.  It’s a fireman’s house.  I don’t know why it wouldn’t be.”

I did hear the Lord say to ask Joel for a kiss under the mistletoe.  I am sorry to say that I disobeyed.  I didn’t get my goodbye kiss.  I didn’t want to embarrass him in front of his new friend and believed I could ask him later.

During our trip to the Smoky’s, Mike and I had spent some time discussing a possible name for our house.  One of my aunts has a name for hers and we think that’s cool.  That evening while they were at the party, Mike told me that he’d thought of the perfect name for our house: “The Cove.”  We both liked it.. a safe place to love and raise our kids.  We mentioned to each other how we thought Joel would think it was cool.

Losing Joel shattered my sense of safety on so many levels.  Joel had taken on a protector role from the time Judi was born (when he was 17 months old).  He spent most of his time at home in the front room and I’d always felt safe knowing he was there near the front door protecting us.

One night, during the blackout after the April 2011 tornadoes, we had a looter come to our back porch.  Joel heard him and roared so loud that I swear it shook the house.  Nothing wakes me except thunder loud enough to shake the house, and Joel woke me.  The looter ran for his life.

To help heal my sense of safety, I’ve worked on several projects.  One of which was to make this sign: 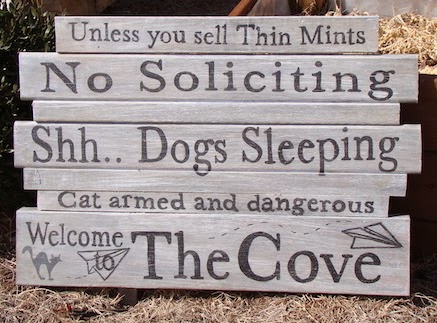 “The Cove,” the humor, and the paper air planes are all in Joel’s honor.  He loved to make others laugh, to spend time at home, and to make paper air planes.  He left one under our TV stand for our well armed and very dangerous cat, who loves to chase them.

The sign may have confused and sent two sales men on their way its first day up, but it obviously does nothing to keep me safe.  If the LORD doesn’t keep us, nothing can.

We don’t understand why God didn’t protect Joel the night he was killed.  There are so many things that could have gone differently: Josh could have never met and played football with the new kids two weeks before, Joel could have had to work that night as he did so many Friday nights, someone could have had a flat tire or car trouble, Joel could have chosen to stay home as he had so many times, but none of that happened.  Joel had a special anointing on him that afternoon.  Joel determined to go.  Joel died.  Everyone else lived.  And I am thankful they did.

God is sovereign; He is with us.  God was not taken by surprise.  He knew Joel before we did, and saw him all the way through to Heaven.

Psalm 139:16-18 “Your eyes saw my unformed body;  all the days ordained for me were written in your book  before one of them came to be.   How precious to me are your thoughts, God!  How vast is the sum of them!  Were I to count them,   they would outnumber the grains of sand— when I awake, I am still with you.”

God was gracious towards me and revealed to me the joy on His face the day Joel arrived at home:

“Let the beloved of the Lord rest secure
in Him, for He shields him all day long,
and the one the Lord loves
rests between His shoulders.”
Deuteronomy 33:12