Sowing Seeds in the Kid’s Bath

January 22, 2010 / Jennifer Coleman / 2 Comments
I was able to finish the photos in time to order and pick them up
on our weekly shopping trip after gymnastics.
I decided to put the parable on the photos and the explanations in brackets
on little cards like at a museum.
I thought that printing them that way would draw more attention to them than
if I put both on the photo and that it was actually easier to read that way.
It’s kinda a long story so I thought it was my best chance of getting it read.
I edited my first post about the parable and put in the words I used if you’d like to read it.
I’d like to put “Anyone with ears to hear should listen and understand.” above it.
But that will be a while later.
Anyone have one of those vinyl letter making machines I can borrow?
I will be taking all the kids into the bathroom for a tour of the story
and make sure that we have a family devotion where we discuss
the things I learned from Joseph Prince.  🙂

I made the numbered birds Sunday.  What for??
When we were selling our house in FL, I bought the new
silvery sage towels and rainbow shower curtain to help stage the house.
For years I had a different color towel for each kid,
so that if there was a towel on the floor there was no question who left it,
although they’d like to argue that there was. 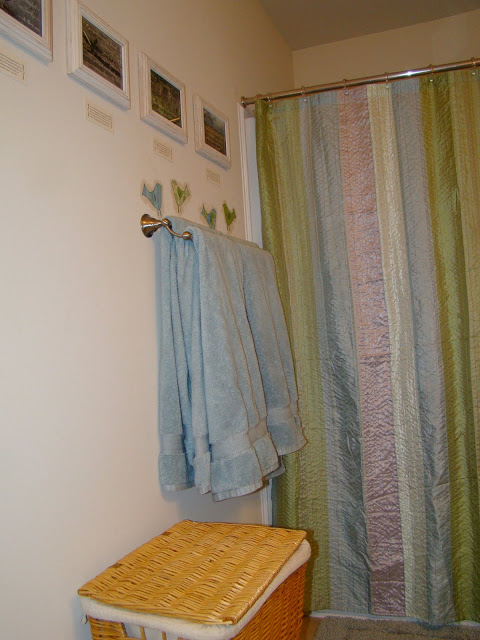 Since I replaced the old ratty towels, no one can remember which towel is theirs
and they almost always choose a new one from under the sink and,
of course, throw it on the floor when they are done.
It took me forever to try to think of a way to identify their towels.  I thought about sewing on colored ribbons.. but then they’d have to look through the towels to find the right one.
So I am trying the numbered birds.  The odd numbers are a little lower than
the even for the towels on the lower rack.
So far I think it’s working.  🙂

Here’s the rest of the bathroom.
I know their getting a little too old for Murdock the talking duck, but he’s so cute.

Thanks for looking at my hall bath parable.  More house photos to come.
J