August 20, 2010 / Jennifer Coleman / 1 Comment
When we were in KS, and I got home sick
the thing I missed other than my 4 guys was our lake.
It’s my favorite part of our house.
I love looking out over it and
spend as much time as I can in the rooms with a view.
There’s a group of 5 ducklings that grew up on our lake.
The story goes that someone gave them to a teacher who lives on the lake.
She mothered them until they were old enough to live on their own.
They stayed close by the lake and to each other all through fall and winter.
When the lake froze over, they hid out in the large, cement pipes
that drain into the lake.  I didn’t envy them.
Then this spring we started noticing that one of the ducks was falling
out of favor with the flock.  At first, he was waddling a couple of feet behind the others..
then more and more.. until he was following more than 12 feet behind.
It was really sad.  I nick named him the Lone Ranger.
Some days we didn’t see him at all,
and I would wonder where our poor, Lone Ranger was.
Then one day I noticed that he looked dirty.
I thought, “What happened to him?”
Then while walking Sally, I got a closer look.
He wasn’t dirty.. he had brown and black feathers!
A few days later I saw him hanging out with the geese
that fly around from lake to lake in the area.
Normally the geese and ducks don’t associate with each other.
The ducks just tolerate their presence on the lake and kinda ignore them.
There’s not much you can do about a group that’s bigger than you and out numbers you.
We normally have 50 to 100 Canadian geese visit at a time
from several times a week to several times a day.
I kept expecting them to fly South or back North..
The never did, so I am pretty sure they live here year round.
So our Lone Ranger has found a family in the Madison geese
and isn’t lonely any more.  Yay! 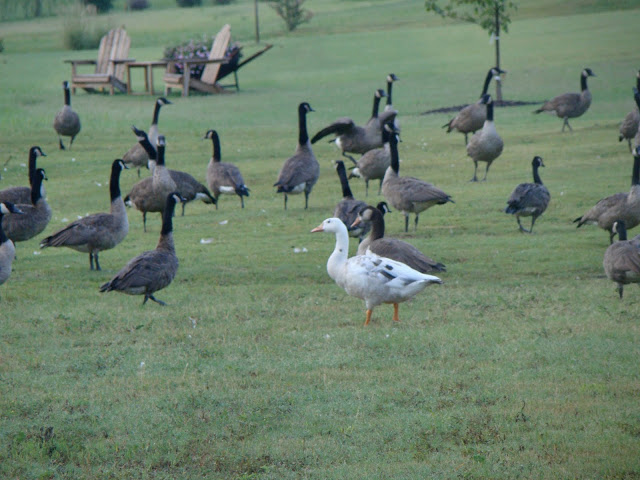