September 28, 2011 / Jennifer Coleman / 1 Comment
On my birthday we went to Sylacauga, AL for a special treat:
a tour at a Blue Bell Creamery that ended with a big scoop of ice cream.
Mike had his standard: Mint Chocolate Chip and I tried something new:
Mocha Madness.  It’s my new favorite. 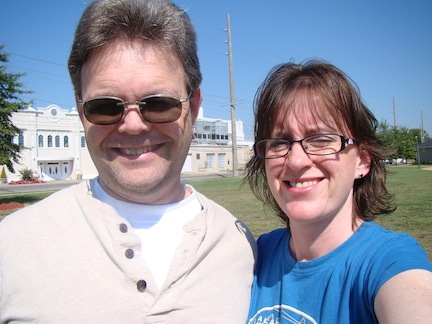 There are only 3 Blue Bell creameries in the country.
This was my first factory tour.  Pretty cool.
Did you know that they make 42 different flavors.
Over half they rotate through – the year.
Mike and I decided that we could never work there.
Their employees get 4 breaks a day and are allowed to grab
and eat 1/2 a gallon on each of their breaks.
We also stopped by the Comer Museum.  It’s an art/history/ Jim Nabors’
museum.  Jim grew up there and sang in the school and church choirs. 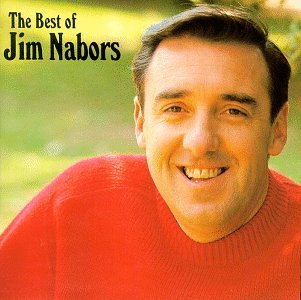 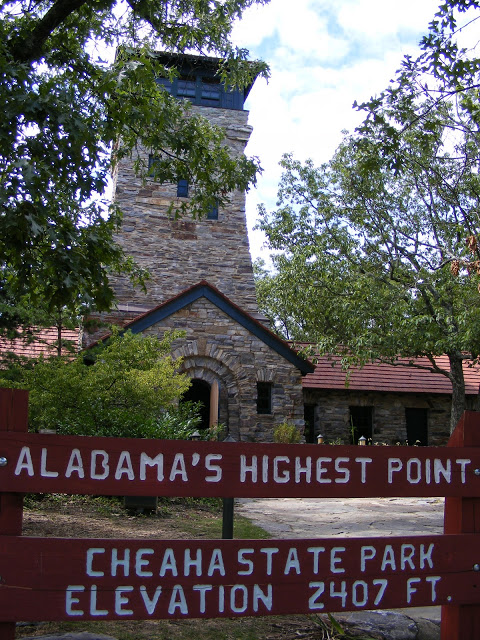 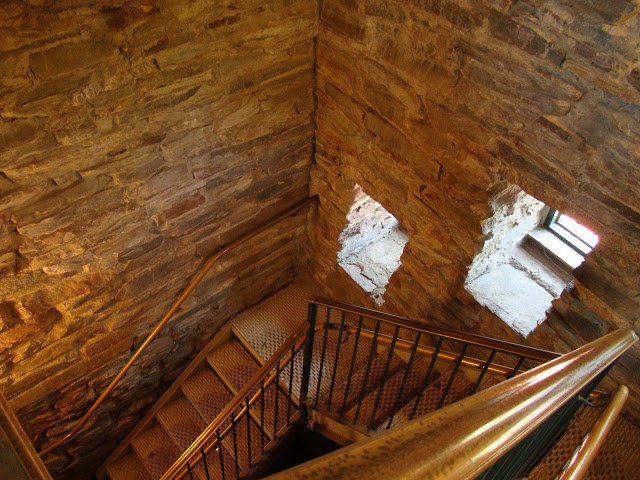 You could see for miles. 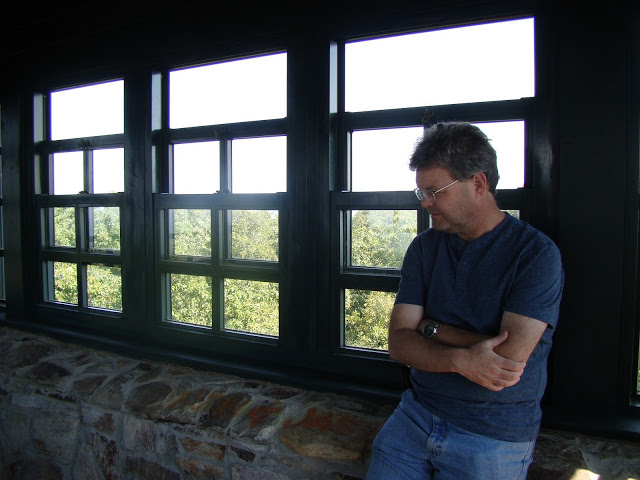 I’d like to watch an approaching storm from there someday. 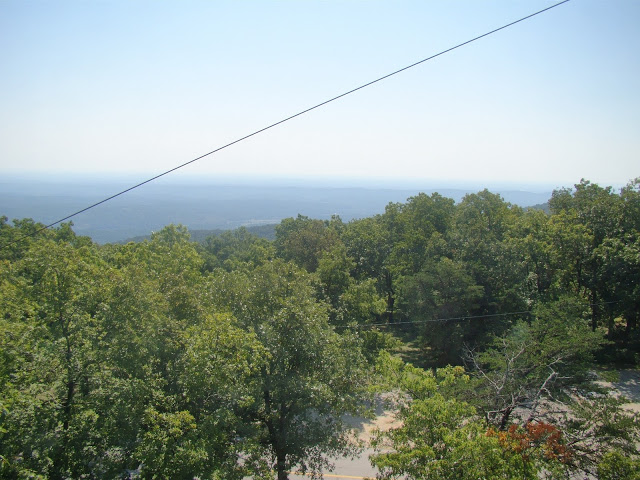 I am a little obsessed with taking pictures of my little car. 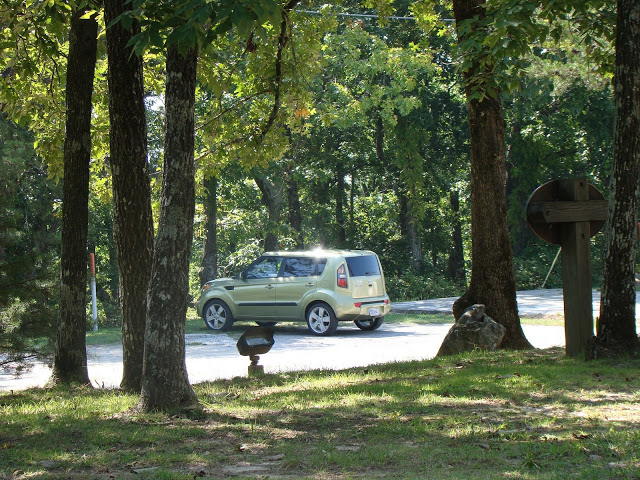 It looks so at home in the forest that
I found a forest name for it.. (see end of post). 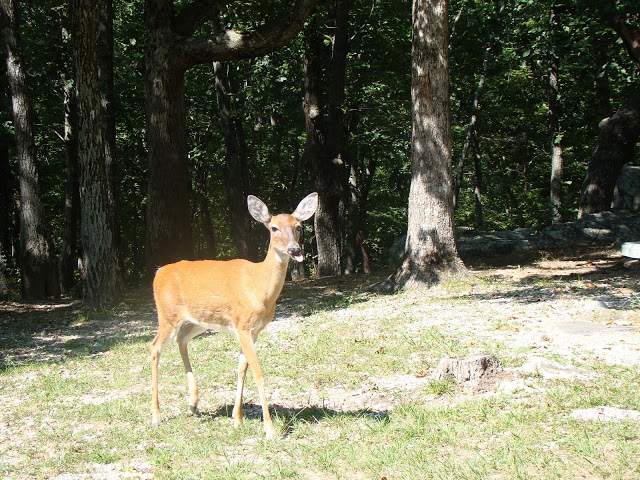 This little dear was hungry; we had nothing to feed her.
While waiting for time for our lunch we took a
hike down Bald Rock Boardwalk Trail. 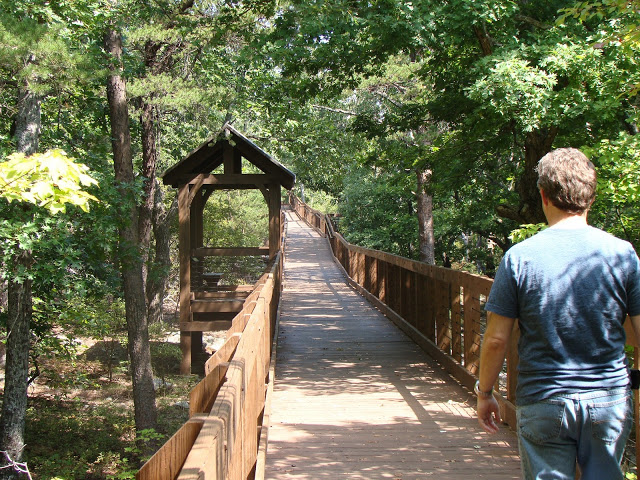 and saw signs of fall. 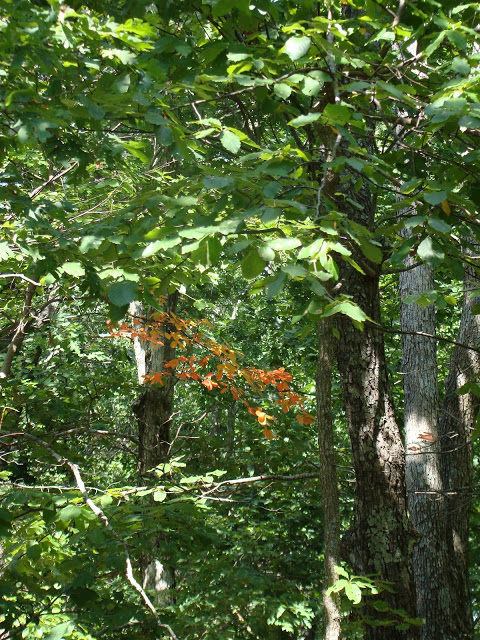 We are so glad it’s September and the weather’s turned cooler. 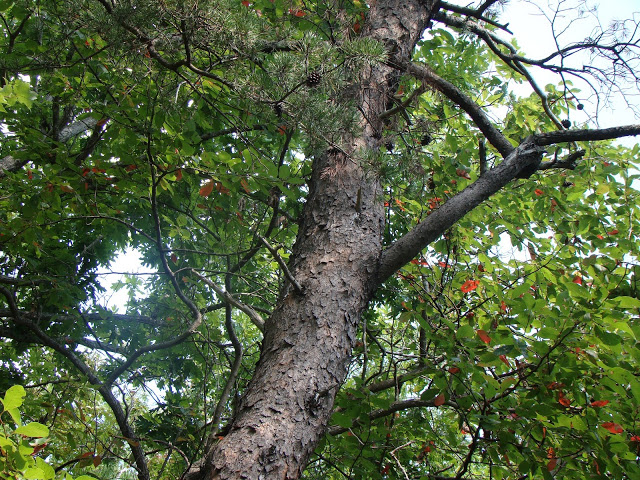 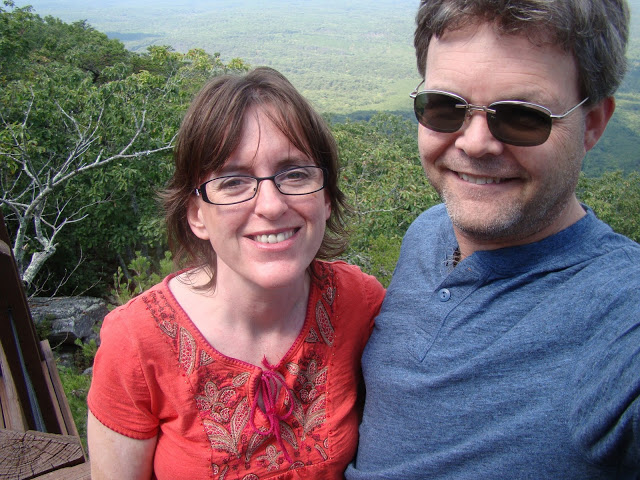 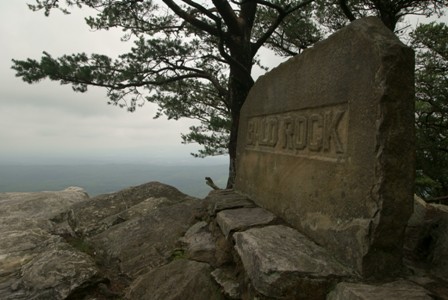 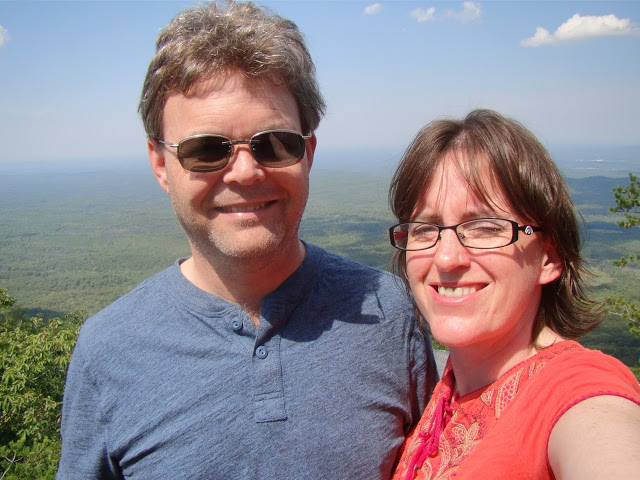 Here we are with the view in view.

Before leaving the park we at at the Cheaha Restaurant;
reasonably priced, great food with an awesome view.
Did I mention that were are on the highest mountain in Alabama? 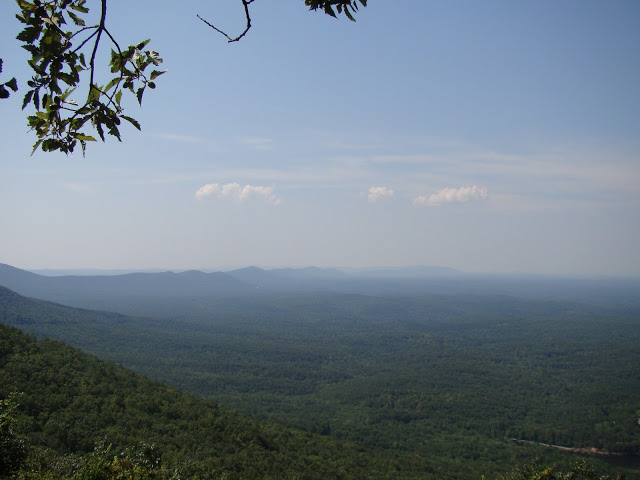 Next we drove about 6 miles South to find High Falls Trial. 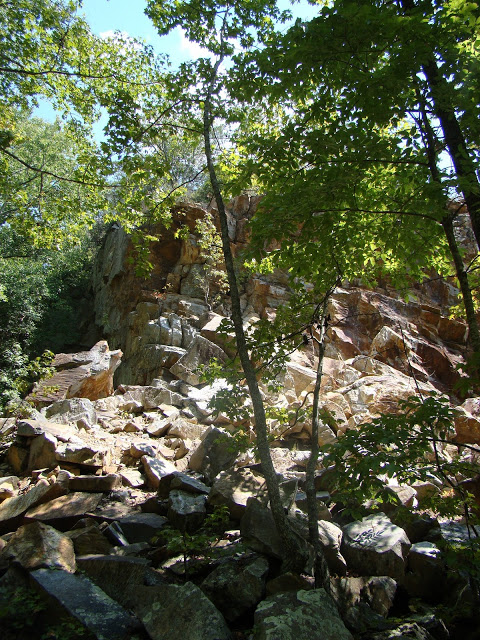 I’d found impressive pictures of the falls on line.
The trickle we found there was a little underwhelming. 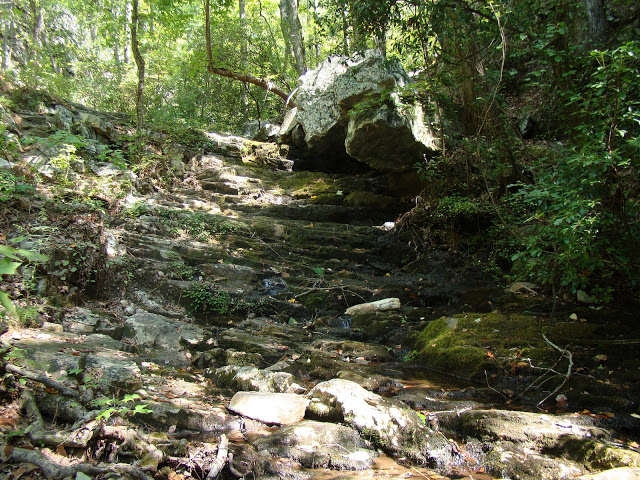 We climbed up the side of the falls along it’s three tiers.
Lowest tier above.  Middle tier below. 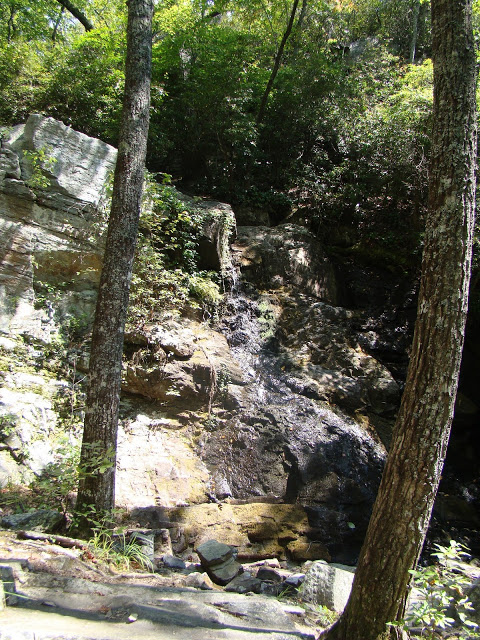 Then way up these stairs.. 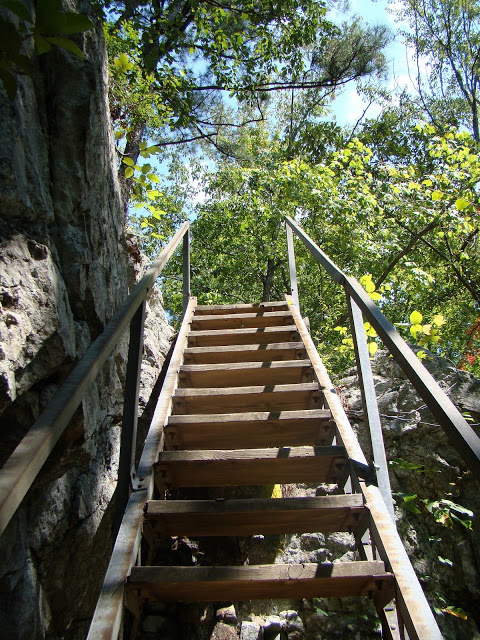 The grand finale.  Maybe we should try again in the Spring. 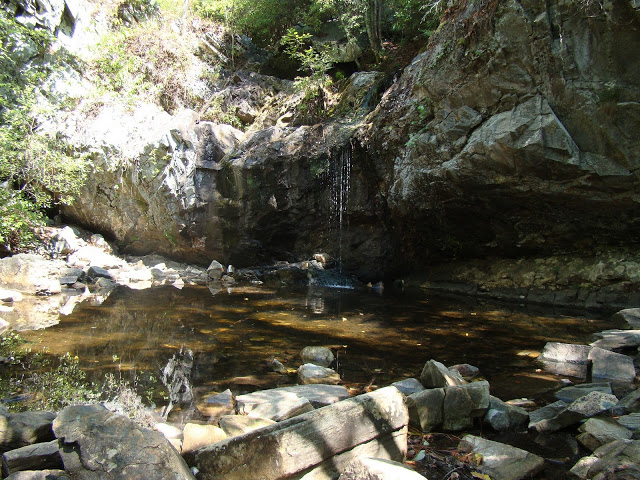 The on-line review of the hike described it as short;
they forgot to mention steep.  It’s not named “High Falls” for nothing. 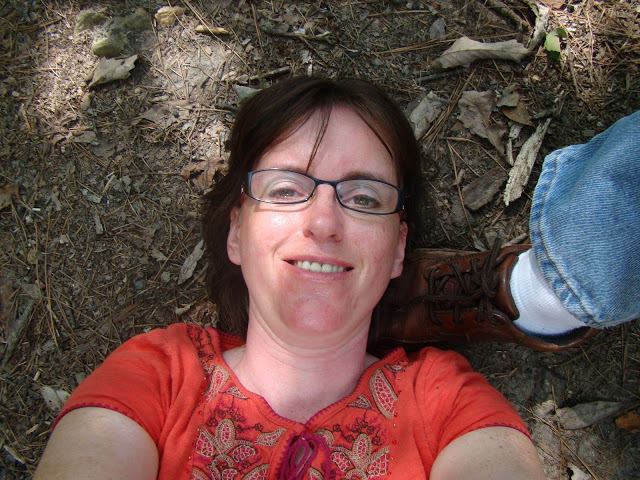 Time to catch my breath. 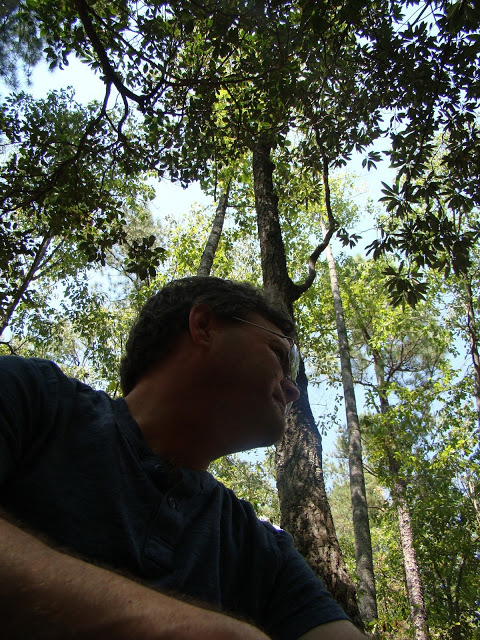 At least it’s cool in the shade. 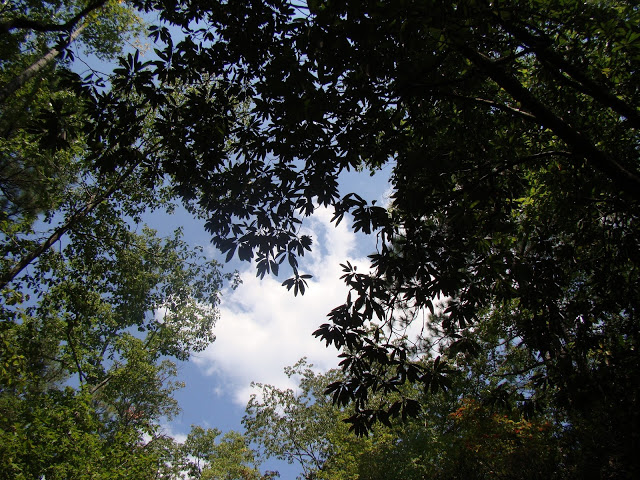 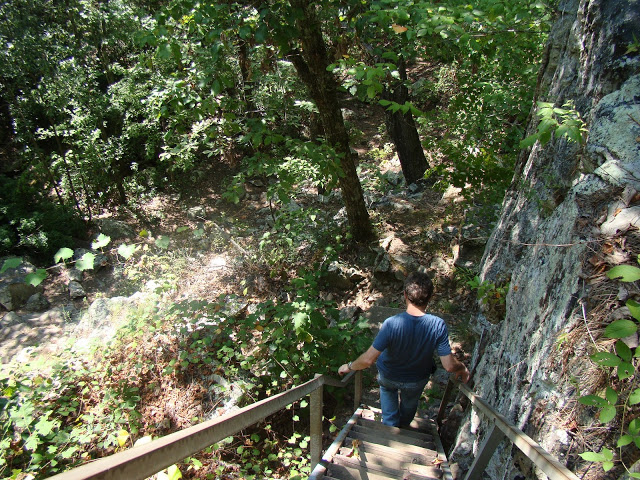 Did I say steep? 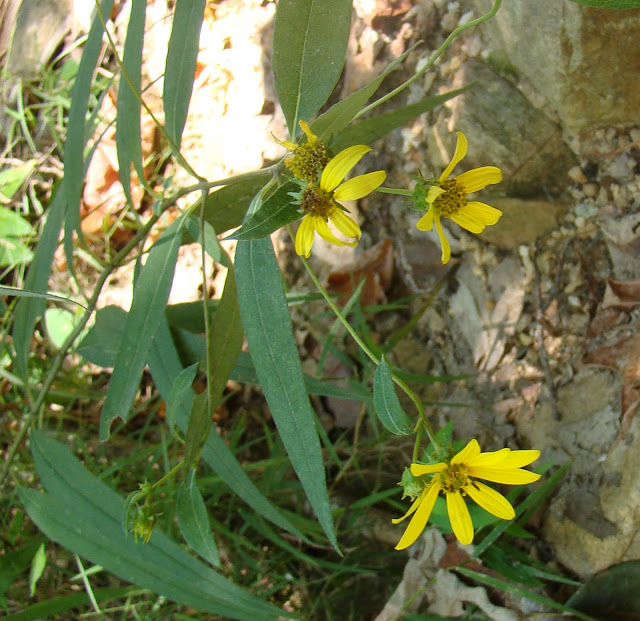 Some flowers along the trail. 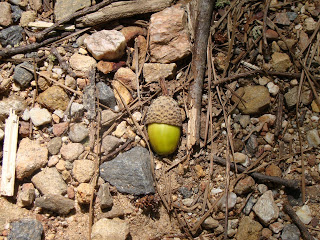 And something that reminded me of my car.
Green and small.. but big on the inside.
“My Little Green Acorn” – does the name fit?