June 26, 2010 / Jennifer Coleman / 0 Comments
With a new addition to the family, comes a lot of new stuff.  First thing we got was
a Litter Kwitter.  I told the Judi if she’d toilet train the cat I’d pay her $50.
It’ll save us probably $1000 in cat litter and I know I’d be the one cleaning it
for years to come if I weren’t paying her..
so I am actually feeling guilty about the steal I am making.
The cat in the add photo is a Russian Blue like George.  I am even more hopeful. 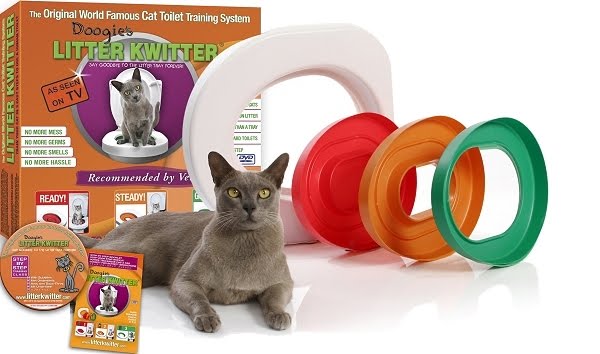 Then we got her some flushable litter, food, food bowls and a collar.
We looked around at food bowls.  The ugly ones designed for pets cost around $5 each.
I decided to look at bowls designed for humans in Target.  They are so much cheeper!

I knew I had this fir at home, and had planned on making her a bed.
I remember when Mamalene used it to make Ruthie a cat costume one year.
I made it so that it opens at the ends and can be used as a tunnel, too.
She loves it; knew it was hers right away.

I knew I needed to do something about a scratching post.
I don’t want my furniture torn to shreds and I’d prefer not to have to declaw her.
Have I shown you the lamp I got a few months ago?  We needed some light
on this side of the living room.  George thinks it’s great.  She even climbed up from
the inside of it one night when it was turned on and made a cool shadow.
Sorry no picture.
She’s also been climbing the curtains next too it.
See the threads she’s puled?  I trimmed her nails.. it’s helped a little. 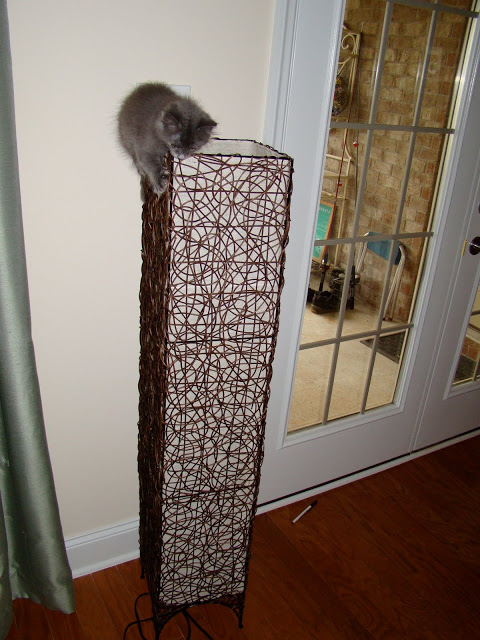 I knew I didn’t want one of those monster climbing trees.
They are ugly, take too much space, cost a fortune and
I am sure that the moment George climbed up it
Sally would chase her and it’d come tumbling down.
So I discovered these cat walk climbing shelves and thought to myself,
“I could make those.”  I tried to make it a Father’s Day surprise for Mike,
but he noticed right away all the money I was spending at Lowes.
I think I spent around $60 total for all the supplies.  It would have cost less
had I not been low on sand paper and left
my wood stain and mineral spirits at our old house.
I found a rug for $12 at TJ Max for the scratching/climbing boards.
I used velcro to keep the mats on the shelves so she won’t slide right off.
George loves it!  She was climbing it before I had it finished.
The first day she climbed up and took a nap on this shelf. 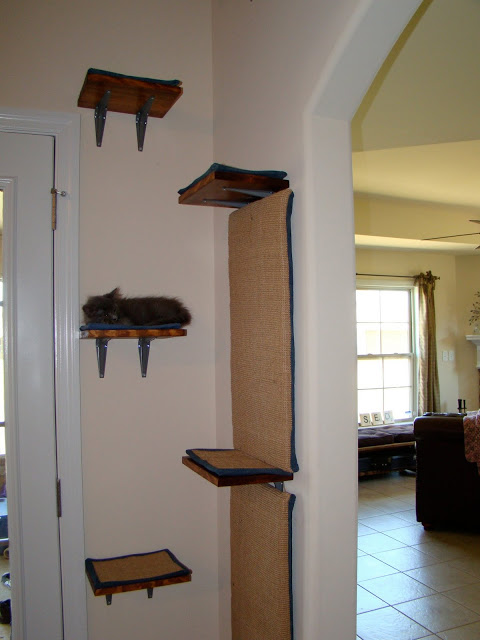 I made her a ball with some left over fur and she like’s it, too. 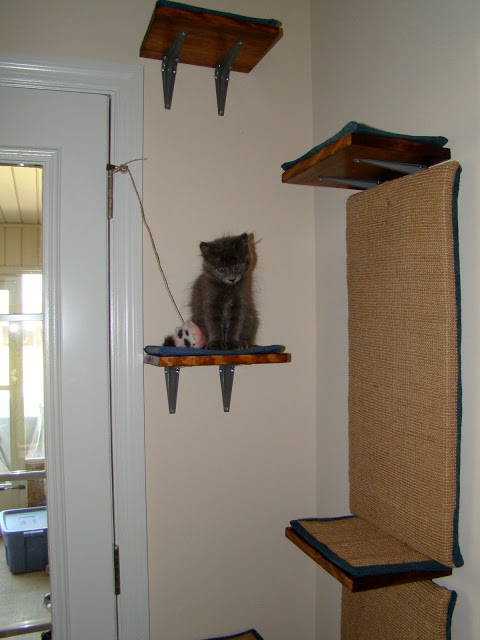 I purposely put the shelf at a height where
she can bat at the kids heads as they walk by. 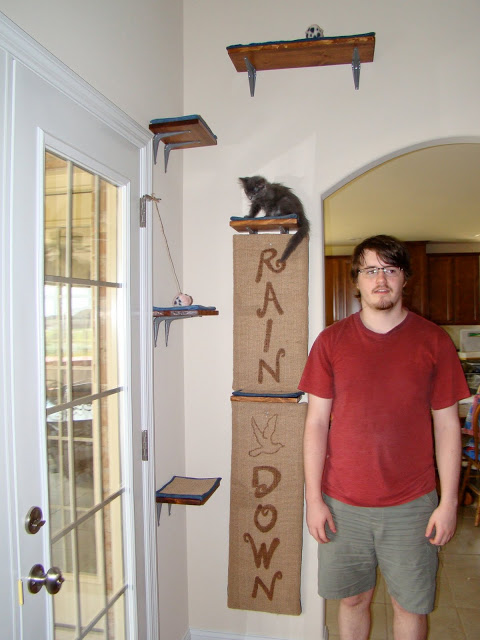 So if you’re tall, Beware! 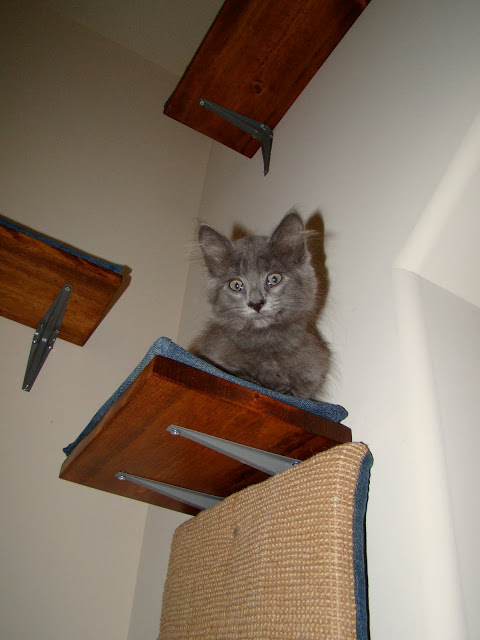 See Joel in the picture below? He’s working on Trig/Calculus.
Anytime he asks for help, I just laugh. 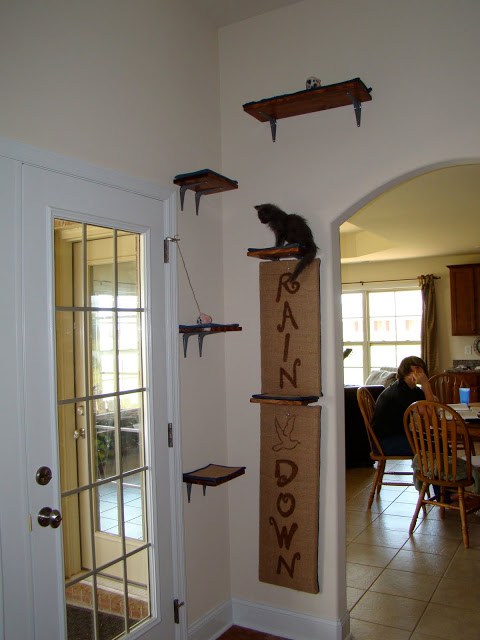 I took the opportunity to use Georgia’s play place as graphic/prayer art.
It’s centrally located where if we catch her clawing
one of our couches (or lamp or curtains) or jumping up on a counter
we can easily take her over to her scratching post.
I told the kids that it’s her time out spot. 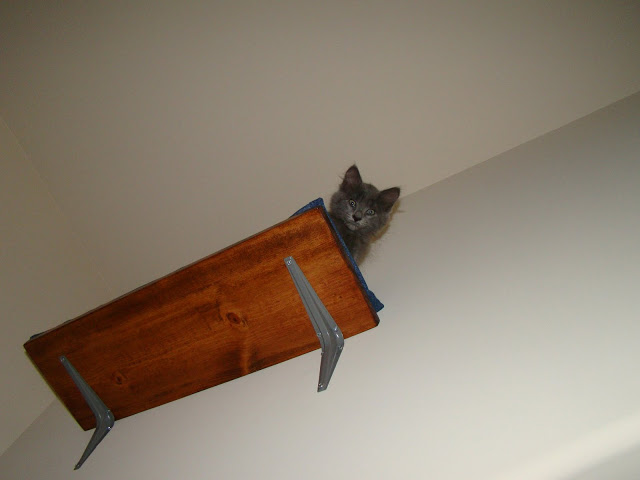 James put her other ball on the top shelf.
Georgie not quite big enough to climb up there by herself,
but she’s already twice as big as when we got her so it won’t be long,
and she can jump from shelf to shelf to get down.

Hope you’re having a great weekend.

June 24, 2010 / Jennifer Coleman / 3 Comments
I went to the eye doctor.  My eyes hadn’t changed that much, except the +1.00
for reading.  Judi went with me and helped me find glasses to try on
and see which looked best.
I decided not to get progressives because I don’t need them to see the computer.
I could get bifocals.. but I would have to get frames twice as big as I am used to.
The doctor said that my eyes will continue to change every year or two
for the next 10 years or so..
I can get two small, stylish pairs on line for about 1/3 the price of one
extra large bifocal pair in Walmart, so that’s what I decided to do.  Maybe I can
just up my reading glasses and keep my driving glasses next time
and save even more money.  I’ve known for a long time that those
eyeglass makers were making a bundle off me.  Glad I finally discovered
how to buy them online.
I am trying to decide between two pair now.

This pair comes in two colors.  Red/black and pink/gray.  I’d get one of each.  Anti scratch, anti glare, polycarbonate, photochromatic, a hard case, microfiber cloth and shipping for less than $85 for both pair.

I found two like this one that I could get for $12 more than the ones above.  They are all at Zenni Optical.  I bought James’ at Eyebuydirect.. I think these are even a better deal.
We are taking George to get spayed today and I am hoping
to find some frames like these to try on while we are out grocery shopping.
I need to get them ordered because they will take a week or so to get in.
Which do you like?
J

June 22, 2010 / Jennifer Coleman / 1 Comment
Well, my glasses finally bit the dust.  They’ve been the best pair I’ve ever owned.
My glasses are normally all scratched up by the end of their first year.

This pair lasted so long that I was feeling guilty about needing bifocals when they
were in such good condition.  Wish I could remember what kind of coating
I had on them.. or where I got them.
I’ve had them three years and they don’t have a scratch on them.

I noticed last week that my glasses were getting week where the bridge
meets the frame.  Today they snapped and I decided to try to superglue them.
I opened a brand new bottle of Krazy glue.  I squeezed it carefully.  Nothing came out.
I squeezed it a little harder and a big blob landed right on my lens.
Judi wanted me to tape them like a nerd.  It’s too late now.

I need help choosing my next pair of glasses.  I can’t decide if I should get
progressives or bifocals or two pair; one for reading and one for driving.
Reading and driving is about all I’d use them for.  Most of the time I only
do one at a time… but then when I think about going to church I think I might
need the two in one.   I’ve been thinking kinder thoughts lately toward the
older crowd that doesn’t bother to open their Bibles;
the screen is so much easier to see.
I’ve been looking around on line for advice.  It’s hard to find.
Some people can’t adjust to progressives and prefer two pair.
Please, comment. 😉

A lot of the stuff I’ve been blogging about I would never take the time to bore Mike with (sorry).  He’s just not that interested in what crafts I am working on or how I organize the house.  Maybe you aren’t either, but I need to tell someone.  Thanks for “listening.”

James has always been the “go to guy” when you need to know where something is in the house, but the last couple of moves he’s started loosing his touch.  A few weeks ago, he asked me where I keep the plastic shopping bags and before I could answer MIKE told him.

I was stunned.  I literally sat there with my mouth gaping trying to figure out what happened, because Mike, even after years of living in the same house, never knows where anything is.  He said, “I read it on your blog.”  Ha.

This morning I saw Mike in my closet (kinda strange now that we have separate closets) so I asked, “What are you doing in there??”

He was putting away toiletries from his trip to Orlando last week.  He learned where they were from my blog.  I guess before whenever he went on a trip, and I wasn’t packing for him, he would just take his full sized shampoo bottle.. but now he knows where I keep the little travel sized bottles.  Funny, right?

I wonder what else I could blog about that he might find useful.

Our 24th anniversary is tomorrow.  He’s wonderful.  I am so blessed… beyond what I could ever have imagined. 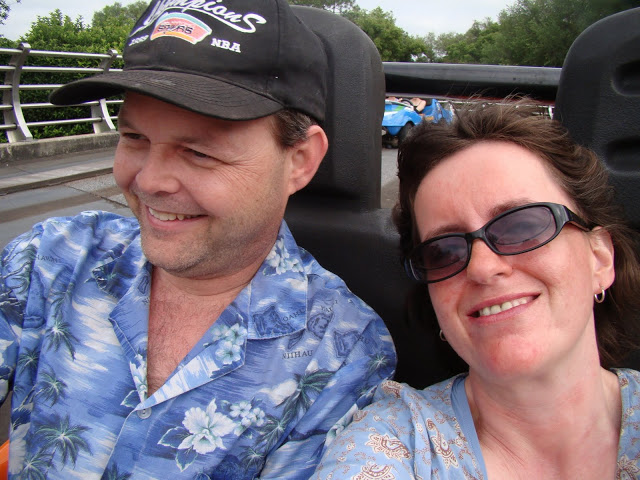 1 Stay committed.  God will bring you through.

2 Don’t try to change your man.. Pray.  God is the only one that can change anyone.  It’s easier for God to do His job when you aren’t in the way.

3 Think on good things… about your man, your kids, your house… whatever your circumstances.  If you are always focused on the negative, you’ll be miserable and you’ll make things worse.  If you focus on the positive and trust God for the rest, you’ll be happier and God will work wonders.

4 Take time out to have fun together.  Life is too short not to.