I started my family quilt 12 years ago when a friend of mine lost her husband to colon cancer.  He was 36 years old, in the military and had a 1 and 3 year old son.

I had prayed, “God how should I pray for healing here on earth or that he’d quickly go to Heaven?”  I’d heard very clearly, “Pray for healing.”  One night while interceding on the floor beside my bed, I had a vision of Jesus interceding beside me.  The sicker he became the closer we believed he was to healing.. when he died we prayed for resurrection.

Days passed and I prayed, “What happened?”  And God answered that it was my job to pray; His to answer; sometimes the answer would be no.  And I learned that He was God and I was not.

In the trauma of it all, I decided to make a quilt of my family so they would live “forever” in a quilt.  As I worked on the quilt, I prayed for help as I do for everything.  I was shocked when I felt His presence helping and guiding me especially with the drawings of my family, which are far above my abilities, because in my heart, I knew I was rebelling against God’s omnipotence and wisdom. 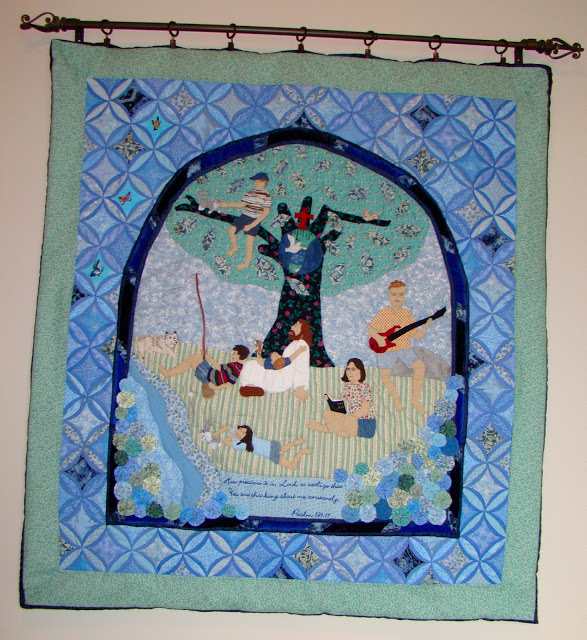 As I made the quilt, I understood what some of it meant.  I knew the tree trunk was Abba God’s hand at work in the midst of everything.. holding everything together with strength and majesty; the dove was Holy Spirit moving across the earth in power.  I knew, of course, that Jesus had James in his arms.  James has aspergers and being both mom and teacher to him I often worried about him not fitting into the mold, not learning how to read until he was 13 etc., but the Lord continually gave me dreams showing me that He was taking care of James and not to push him.

Most of the time I was too fearful to ask the Lord what the rest of the quilt meant.  I was afraid that James being in Jesus’ arms might mean that he was going to die, but one day while working on the border, I felt prompted to ask what all the blues meant.  He answered me that they were days; some light and happy and others dark, but that He would be with me through them all.

I started this quilt in the summer of 2000, but I didn’t finish it until the spring before Joel went home.  Homeschooling 4 kids didn’t leave a lot of time for quilting.  I think I finished the middle part the first year, but then moves came, algebra, team sports etc.; months and sometimes years passed without a stitch.

Then we were moving again, and I decided that I was going to finish the quilt.  It had been so long since I’d started that I decided to stretch Judi out to make her taller, then I finished the quilt with a crazy quilt border and hung it in our house in Montgomery.. but I didn’t like it.

We moved again to Huntsville this time and when I was diagnosed with breast cancer in February of 2011, I decided to take the border apart and start over with a different design.  One of the ways I deal with grief is by being creative.  The Creator creating through me helps bring healing.

Then finally, I was finishing the quit a second time and I wanted to add our new puppy to my quilt, but Joel said, “No, it should be like a frozen piece of time.”  So I finished the quilt without adding her in and hung it in our music room… which was in a way Joel’s room.  He almost never slept in his bed and only used the room he shared with Josh as a closet.

One day, while I was visiting Joel in his room with the quilt and admiring it, Joel said, “It looks like a stain glass window.”  He liked the idea, but I had a problem with the thought that it might be memorializing my family.  I didn’t want anyone to think that I put my family above God.. because I so didn’t.  I actually agonized over leaving it up and thought about taking it down many times.

So knowing full well that the quilt pattern I’d used for the new border was called “cathedral window,” I argued weakly that we weren’t apart of the stain glass window .. it was a clear window bordered in stained glass, and we were outside enjoying God’s creation.. picnicking or something.  He looked at me like, “Yeah, right.”

On the Wednesday after Joel had been murdered, a friend from Birmingham brought us dinner, and my mother showed her the quilt, and I saw.. for the first time more meaning in it.  I saw that Joel was the one up above all of us in God’s hand, that God knew all along that the number of Joel’s days would be short and that we would be left here on earth with Jesus in our midst.

The meaning of Joel’s names: Joel “God is Sovereign,” and Manuel “God is with us” were demonstrated in my quilt.  We don’t live in a crazy quilt world.. a world bordered in chaos.  We live in a cathedral window world.  A world designed by God with beauty and purpose.  A world were God works everything together for our good.

James is still in Jesus’ arms looking up at Joel.. seeing clearly that he is in God’s hands.  Josh is leaning on Jesus fishing.. for men.. for answers.. for cures for the earth’s woes.. for wisdom and direction.  Judi looks like she’s in a dream world chasing bunny trails.. but the angels (our rabbit, Angel, died of breast cancer at 10 years old shortly after we moved here) are close beside her.  Mike is finding refuge in worshiping while leaning on our ROCK, as am I.. as I search, study and meditate on His word and as I record what He is teaching me.

In these dark days, the one thing that gives me the light of hope is remembering the instructions God gave me early in this grief journey .. to think of Joel as having pushed a head of us in the race.

Hebrews 12:1-2 says
“Seeing that we are surrounded by so great a cloud of witnesses, let us lay aside every weight, and the sin which so easily entangles, and let us run with perseverance the race that is marked out for us.

Let us fix our eyes on Jesus, the author and perfecter of our faith, Who for the joy set before Him endured the cross, scorning it’s shame, and sat down at the right hand of the throne of God.”

It’s fun to think of running a race with Joel, and of course, he would push ahead of me and win, but maybe one day, in Heaven, I’ll get a re-match.  It encourages me to think of Joel up in that great cloud of witnesses cheering all of us on and I look forward to meeting him again one day at the finish line as I keep persevering in this race while keeping my eyes fixed on Jesus.

I struggle daily with either wanting to re-write Joel back into the story God is writing so skillfully.. or begging God to bring me to the end of my story where my suffering ends, every tear will be wiped away and I will hold Joel in my arms again.

I am working intentionally on my grief; asking God for right thoughts to replace my deep longings.  I work purposely and methodically at turning my thoughts to asking for strength and wisdom to live each day for His glory.

Psalm 139:16 says “You saw me before I was born. Every day of my life was recorded in your book. Every moment was laid out before a single day had passed.”

This weekend the Lord showed me through this verse that not only was the December 7th marked out for Joel to lay down his life for his friends at the birthday party .. but today and however many days there are left until I see Him were laid out for me to continue living with His help for His glory.  Joel’s story was written on mine before I was formed in my mother’s womb.

The following verse (verse 17) is embroidered on my quilt:

“How precious it is, Lord, to recognize that You are thinking about me constantly.”

Glory to God, Who’s ways and wisdom are far above ours and Who thinks about us constantly!

I Peter 4:12-13
“Dear friends, do not be surprised at the painful trial you are suffering, as though something strange were happening to you. But rejoice that you participate in the sufferings of Christ, so that you may be overjoyed when his glory is revealed.”